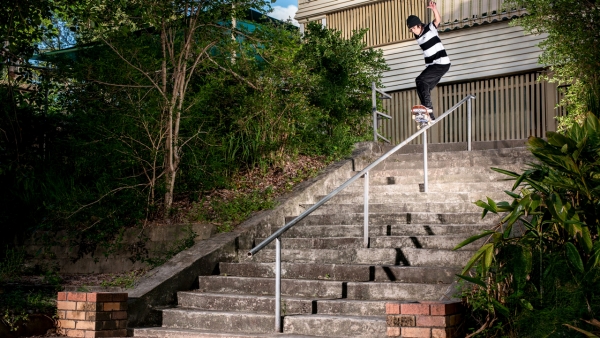 Getting inveted Down Under, Nixen tosses up a gymnast plant     Photo: Hay

Nixen Osborne is an Australian ATV, able to crush a kinked rail and throw a 540 the next minute—which makes sense when you learn he’s related to the legend Lee Ralph and has grown up in the Parliament shop scene. Let these stories of slams and gut-wrenching loss bring new appreciation to his approach.

Nixen’s curtain-closer deserves your attention. Peep the part before you start

G’day, Nixen. What are you up to?
Yo, just finished up in the mountains, my G. My girl and I went to Upper Beechmont in the Gold Coast Hinterland to see some relatives of mine and just take in the scenery, pet some cows and listen to the birds chirp. Then we did a bit of op-shopping and now I’m home.

So you have a fair bit of your family on the Gold Coast, right?
Yeah, I have a bunch of family on the Gold Coast now—some family I don’t even know as well. We pretty much all came over from New Zealand. Gold Coast has only been home for four years, though. I grew up over in Western Australia, in the middle of nowhere, so it’s good living somewhere with good opportunities. I’ve always been a bit of gypsy, travelling around the place.

Maori families are always so big. If you were to say a rough number, how many cousins do you think you have?
Not even joking, I have about 80-plus first and second cousins. We had a family reunion the other day and I met an extra ten. It’s kind of crazy. That’s just the ones I know of, though. There’s definitely more. 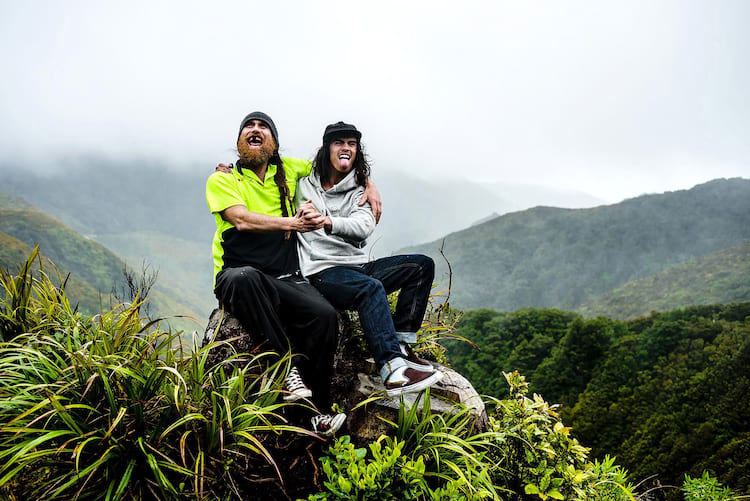 And with your huge-arse family comes a few skateboarders, too.
Yeah, my dad was a really good vert skater. He used to kill it, but broke his femur at a Vans Warped Tour, so he just kind of faded from skating. Lee Ralph is my uncle, super lucky to have him in my life. He’s done a lot for skateboarding and is just an all ‘round legend. But the one that got me into skating was my cousin Lakyn. He kills it, jumps down massive rails and skates transition really good. He’s filmed some really great parts. He’s the one that really got me into skating. 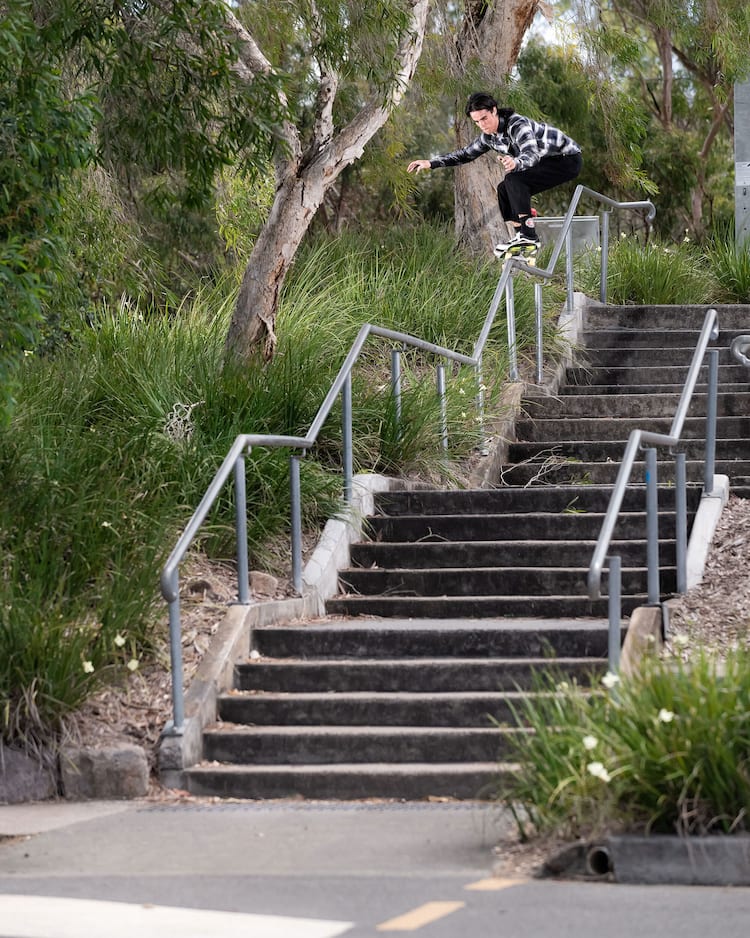 Jumpin’ down massive rails of his own, quintuple-kinked 50-50     Photo McLaughlin

Lakyn is the man. And he is a great musician. Does that also run in the family?
Yeah, Lakyn is a freak. He can play every instrument at an elite level and his voice is insane. Music is massive in the family. It’s so good when everyone gets together.

Fam jams. I hear you’re also pretty good on a BMX. Any tricks you’re working on?
Yeah, I go alright, aye. Just trying to do bigger airs, maybe a tailwhip every now and then. Backflips used to be the go-to when I was younger but I’m not trying to do that these days.

Your BMX slam in Fitzy Bowl the other day was classic—over the spine to over the hangers. You don’t mind a good slam on the board either, which brings to mind a particularly scary one that happened recently.
I fully forgot about that one. I just love a slam in general. I did have a bad one recently; it made it to Hall of Meat actually. Pretty stoked on that. I was warming up with a back 50-50 on this 13 rail with ply landing and grass straight after. It was a freak accident. My wheels got stuck because the grass was soft from the rain and I got pitched straight into an electrical post—got slept, had a seizure and a concussion. Considering what happened, I came out all good. I feel bad for everyone that had to witness it. I thought it was chill because I couldn’t remember it, but apparently not.

The way you hit the pole I thought you’d broken your neck. Then you went straight into a seizure, so I was trying to hold your neck still and keep you on your side while the crew called the ambos. We didn’t think you were going to be all good. But after all your scans, there was no serious damage at all, somehow.
Yeah, honestly sometimes I feel like there’s some sort of guardian angel hanging over me. It must’ve been T Buns protecting me, to be honest. I know now that I’ll always come off second best flying head-first into an electrical pole. You’ve actually been there for 80 percent of my bad slams. I’m lucky to have you around. I’m glad I didn’t break my neck, though—lucky I didn’t break my jaw, either. All I got was a tiny cut in my ear. Although I found it hard to concentrate for a few days after it happened.

Maybe it’s unlucky to have me around? Funny you say that about T Buns. That was literally the first skate we went for after he went missing. I think that made the situation even more traumatic.
Yeah, it was actually. It was a traumatic chain of events. Our beloved Trent, everyone’s favorite, the man with the aura that you wanted to be around, he sadly went missing out on his boat while fishing a few months ago. I was away on a trip while everything was going on, so it was fucked. I felt so disconnected and heartbroken. Trent was the first close friend I’ve ever lost and it hit me hard. All the boys forget how young I am. I was just a young boy when I met him and I have always looked up to him so much. It hit everyone so hard. It just reminds me to be a better person, to love and respect the people around you. Because that’s how Trent was and being like Trent just reminds you to smile, be happy and just be a more positive person. My love goes out to Freddie, Jackie, Shannon, Zara, Louie, Kyia, all of his close friends and everyone special to him. I know he’s out there somewhere smiling, so that’s what I’m going to do as well! Love you, Buns. Your inspiration transcends through everything.

It’s been so hard on everyone, especially Kyia, the family and close friends. I’ve lost a couple of close friends before, but the circumstances around Trent missing definitely hit different. Just not knowing what happened, your brain does circles. It must have been so hard being away for the search.
Yeah, it was really hard. My mum and my nan were giving as much support as they could, so I was there in spirit. It’s hard with no closure. It’s hard when It’s someone very special. It brought everyone closer together and that’s what made it special; he made this effect. As his dad Freddie said. “Trent did himself a whoopsie daisy.” The Riley’s are the strongest people. You have to stay optimistic and positive even when it’s the hardest thing to do. Rest in peace to the special ones. Tell your friends you love them and remind yourself every day that life is good.

As much as it sucks that we’ll never see him again, he created a crazy movement. Thousands of people showed up, putting their shit on hold and safety on the line to come search for him, a reflection of the love he showed everyone else. As Freddie also said, “Something beautiful is happening.” Many have said he did all he needed to do here; his life was content and he had to go on.
Yeah, straight up, he did. I’m glad he was a part of my life. We had some great times together. The Rileys are the strongest family. They’re so spiritually enlightened; it’s amazing. Love you, guys! 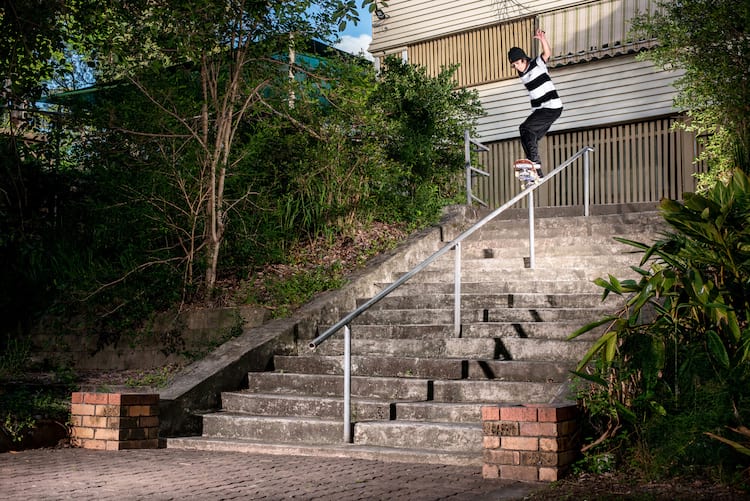 He even managed to film a full part for this Parliament video in half the time that everyone else had. Tell us about how this project came together.
Honestly, Trent is one of the most motivated people I ever met. His ability to go out, skate, film clips and get constant results, all while having a huge smile on his face was amazing. His style, trick selection and work ethic is why. He does the Mahi and gets the treats! Shout out to Patty G, one of my best mates. He is a huge part of it all, obviously being the filmer for this amazing project. But he’s the one that makes the calls and gets everyone motivated. We’ve spent lots of time together, lots of blood, lots of slams, friendly disagreements and a few cries along the way. Patty has helped me through it all, mentally and physically. Very grateful to have his time and support. I will always have the most appreciation and love for that man. It’s a very special thing for me.

Got worked and came back for more—front feeble

Patty fuckin’ G, the guy is like the Energizer bunny on pingers. Always keen to give anything a crack, always positive and gets the results. All of you killed it. And now this video is even more special because it has Trent’s last part. Tell us about being part of the Parliament skateshop family.
Oh yeah, definitely. You have to love it, though—straight up, passionate as fuck and just always keen. That’s the type of shit I need. It’s super special for me; I get to be a part of something great with my brothers. It’s a pleasure to be able to share something so great, and it’s a legacy having Trent’s last part. Parliament is my second family. When I was younger, I was fucking up a lot and getting into trouble. My escape was going up to Brisbane and being around all the Parliament boys, skating as much as I could. Jesse, the owner, has been a great role model for me and I’m super appreciative of him. He just cares a lot. But everyone took me in like a little brother and that shit’s special. Who knows what I would’ve been up to if I didn’t have those guys. 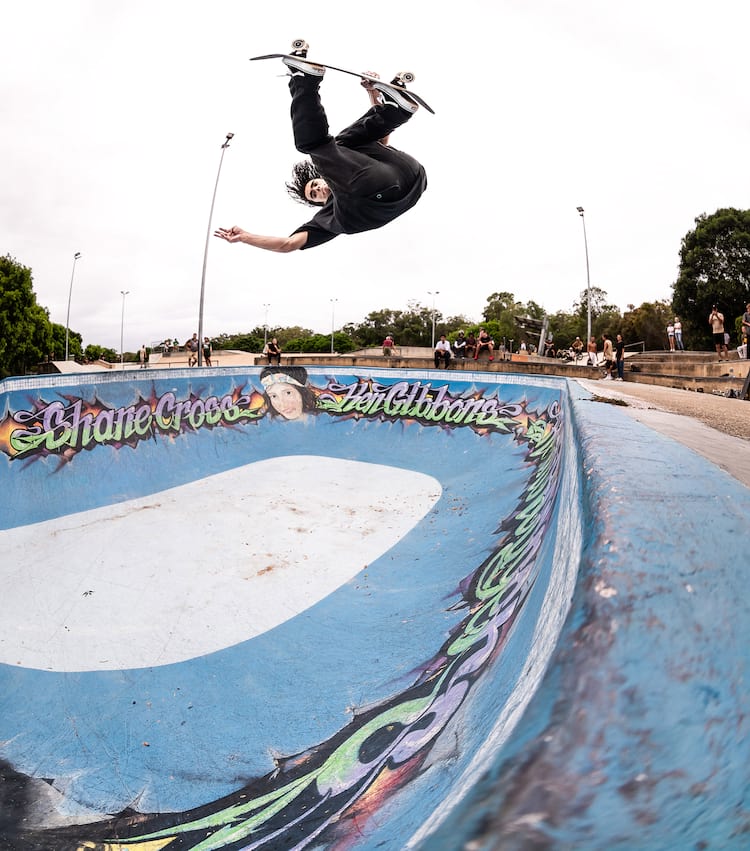 McTwist where Shane got the cover     Photo: McLaughlin

Ken oath, brother, love you! What are you working on next? Any sign-off notes?
Love ya, bruv! Just trying to get back on a roll again with getting clips and staying motivated. Always trying to keep the roll going! I would love to thank Thrasher, NHS and all my sponsors for giving a young Maori boy a chance to live his dream. When I was younger there was no way I was thinking I’d be on Creature, Vans and Indy, or have a part out on Thrasher. I can’t wait to go to the States and spend some time with the Creature crew. A massive shout to Patty for being there, motivating me, giving me his time and for staying passionate. A massive shout to you. You’ve helped me out too much and I’ll always be grateful. Shout to Nan for being my biggest supporter and believing in me. Love you, Mum—you did a great job and it won’t go unnoticed ever. And thank you to the people that took time to read this. Rest in paradise, Trent Riley. Love you forever. 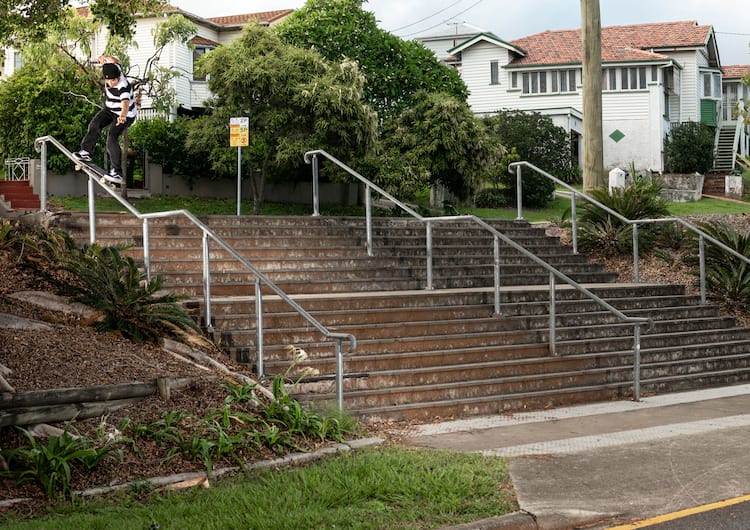 Frontside 50-50 to keep the roll going. Our rails are in trouble when Nixen gets to go Stateside     Photo: Hay