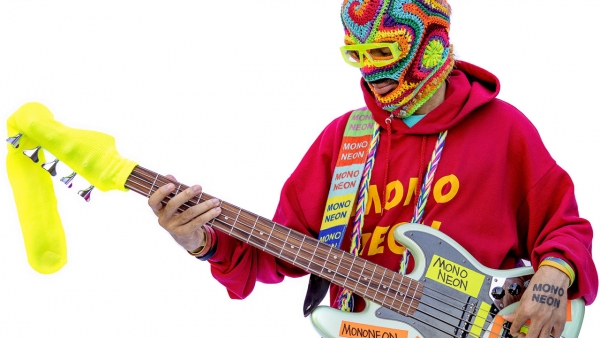 Where are you from?
I’m from Memphis, Tennessee.

You play every instrument?
I try.

What was your first instrument?
A guitar, but I played it like a bass. That’s the only thing I knew, seeing my father play.

So your father is a bass player as well?
Yep! Dywane Thomas. I’m the junior.

Would you go to his shows as a kid?
He would take me to some of the shows. I remember he was playing with Rufus Thomas at the Memphis in May festival. It was under a tent. And he would play at BB King’s club sometimes. That’s really the only shit I remember. The first time me and dad ever played together was 2006 at the Porretta Soul Festival.

Do you think that planted a seed of you wanting to play music?
It had to be because I don’t know where it came from. And my granddad was a piano player, too. His name was Charles Thomas. He played with Ron Carter. A lot of people don’t know about him.

What draws you to music?
Well, I know it calms me down because I do have anxiety and shit, so it just helps me out. I’ve been playing since I was four and I have not looked back.

What about hip-hop?
Being from Memphis, I grew up on the old Three 6 Mafia shit, when everybody was in the group. Playa Fly—just a lot of old Memphis gangsta rap.

Were you going to hip-hop shows?
Not really. My cousins used to babysit me so I was around that sound. They used to play all the old shit from 8Ball & MJG to Project Pat.

What is your process like for making records? Are you always writing songs?
I just be writing stuff. I really don’t be thinking about it. When I wrote those songs for the Banana Peel on Capitol Hill album, I didn’t know the riot on Capitol Hill was going to happen a few days after the album release. It’s weird. I thought it was like dumb-ass songs I was just writing, but it turned out to be something special, I guess.

As an artist, do you feel that you’re able to make a difference with your music?
Hopefully. Because my writing has changed over the years. I used to write risqué songs. I mean, I still do, but it really has changed because I’m trying to grow and get better—not only an artist, but as a person. I do like finding ways to write songs about farts, though. What I been focusing on now is working on becoming a better songwriter—writing lyrics, writing songs is where my head is now.

With everything going on in the world right now, have you been traveling?
I’ve been traveling a lot, yeah. It really hasn’t stopped me much. At the beginning it was tough, but I’ve been going everywhere.

Have you been doing sessions and recording?
Yeah, I’ve been on sessions. Not really last year, though. I probably done a couple live shows, but really just recording.

The live shows, were those streams?
It was an audience. It was in Dallas, Texas. And I did a live show in Beaver Creek, Colorado, with Vernon Reid from Living Color, DJ Logic, Daru Jones—he plays with Jack White.

How many people were at the show?
About ten. They would just spread it out. And it’s with dancers, like choreography. It was improvisational and we just structured it. It was cool to be on stage again. I wish it would go back to where it was, but that probably won’t happen.

Are you working on new record?
I’m definitely working on another album. I got some pretty cool features on it. I’m releasing a song from it soon. It’s like a duet; I’m singing with Ledisi. She’s one of my favorite singers.

Who are your favorite bass players?
Well, of course my dad. Also Anthony Jackson and Victor Wooten. When I was younger I really never seen a lefty upside-down bass player slap, because I play upside down and shit. So seeing Victor Wooten thump the way he does really made me practice on my slapping and thumping more. It was difficult trying to thump upside down—I’m still working on it. So he’s an influence. And a friend of mine named Joe Cleveland; he lives out here in LA. He’s a young dude who’s bad as hell. He’s fearless on his instrument. Also Joseph “Lucky” Scott who was Curtis Mayfield’s bass player and David Hood from the Muscle Shoals rhythm section.

Why do you play the way you do, upside down?
I’m actually right handed but I play left handed. When my dad gave me a guitar, I just flipped it over. That was when I was four years old. That’s was what my mom told me.

And no one ever corrected you on?
Nah, he said, “Leave him alone.” And my dad played the right way, I guess. He played right handed. I don’t know why I flipped it over.

Did you take lessons?
No. I went to Berklee for two years, but I left, like a lot of people do. I met David Fiuczynski at Berklee. He’s my mentor—especially whenever I dig into my microtonal shit.

Were you reading music?
I can read music. I’m not the greatest sight reader, but if you give me a chart I’m not going to look dumb or nothing. I can use it as a map.

What other instruments do you enjoy playing besides the bass?
The guitar. I don’t consider myself a guitar player, but I play a lot of guitar. I write more on guitar than bass because I can hear the harmonies better. It’s more rhythm. When I was playing with Prince, that really inspired me to work on my rhythm shit.

Playing with Prince is the highest honor. What was it like?
It was super cool. It wasn’t what I thought it would be. Like, it was really weird and shit, but it was also laid back. I still think about those Paisley Park shows that I played with Prince. I miss that shit so much, mane!

How long did you play with him?
He hired me to play with Judith Hill, his protégé singer, for her live band. Then after that I started playing with Prince in late 2015 to early 2016. The last time I was with Prince was February of 2016, the year he passed. The only song Prince released from the sessions we did at Paisley Park was a song called “Ruff Enuff.”

So sorry, man.
I wish it would’ve lasted longer, though, because I’m still not over that shit, to be honest. And that was 2016. I miss playing with Prince and just simply being around him, jamming at Paisley.

Who would you love to work with?
Tyler The Creator. I like his shit. I wanna do a song with Mavis Staples. I’d love to do something with George Clinton, too!

Did you ever skate as a kid?
I played the Tony Hawk video games. I didn’t skate, though. I wasn’t very active as a kid. I was just into music. Later on I got into Taekwon-Do and baseball, but for some reason they didn’t really keep me entertained. I just wanted to play music.