I’d seen ’em turn into raging rivers before. But as we headed into the pipe’s gaping mouth it was 100-degrees outside and there wasn’t a cloud in the sky. This spot was a favorite to hit on hot summer days. A 300-foot-long ditch led to a seven-foot-tall pipe—all smooth, downhill and super fun. Once you got into the pipe the temperature instantly dropped and it was more or less pitch black, a two-mile hill bomb with flashlights or headlamps required! On a previous mission Wild Man had managed to frontside air over an intersecting side pipe, blasting it like a subterranean channel. I wanted to film it for my next video, so to capture it properly I recruited George and Kevin to help me drag the camera bags, lights and a generator the half-mile into the pipe to reach the spot. With our boards, gear, headlamps and flashlights we headed in. 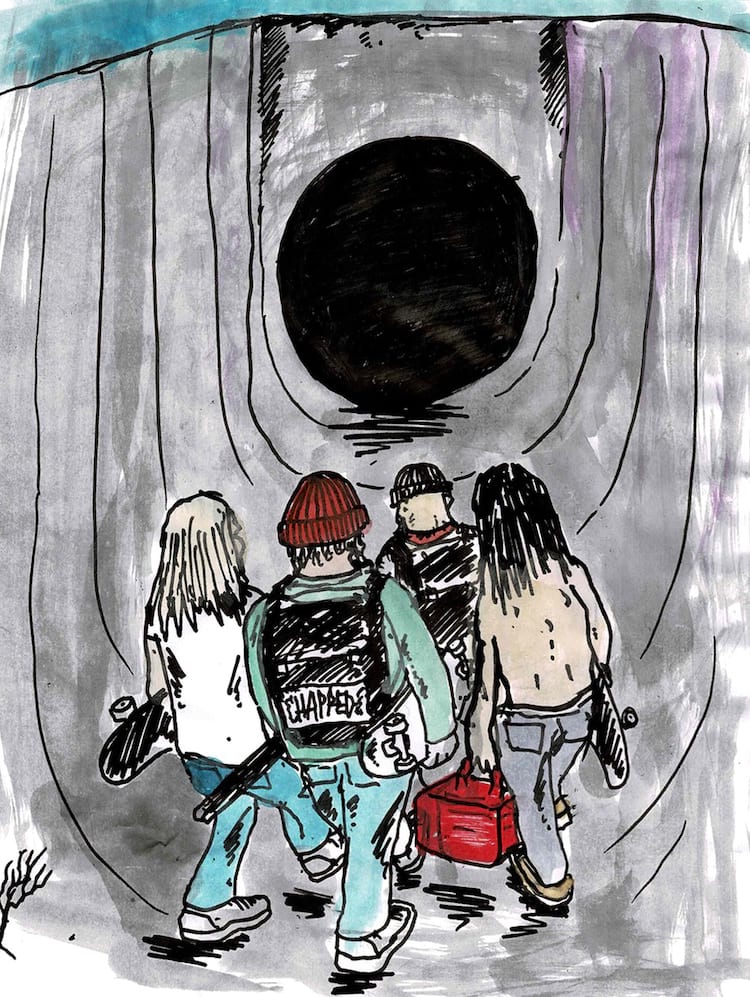 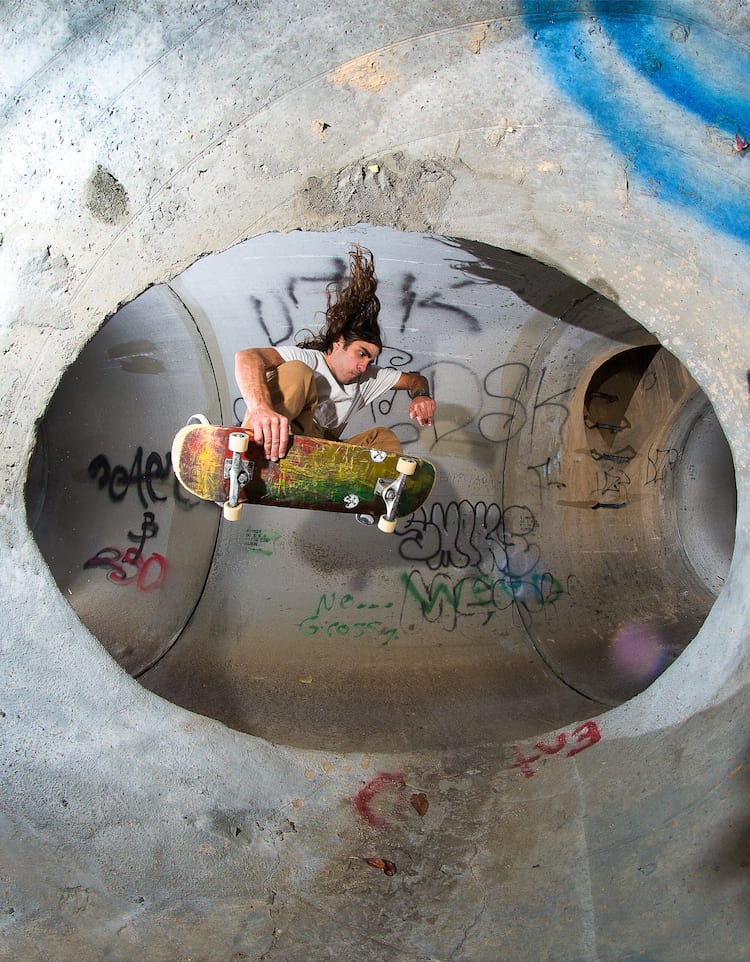 We got to the spot and got everything set up. All the wires were taped up on the ceiling of the pipe and people were getting tricks when we started to hear thunder. “Nah, those are just cars,” someone suggested. I made everyone stop and we started to break down the equipment, but the lights were too hot to put away. I rolled a cigarette while they cooled and again thunder reverberated through the pipe… and again, and then again. “Fuck it,” I said and we began to put the lights away hot when the rain started. You could hear it all the way up on the surface—it was like a crowd cheering at a baseball game or something. “Go, go, go!” we told each other as we grabbed the gear and hustled back up the pipe. Worry started to creep in as we made our way. That’s when this little stream came running down between our legs. It got us moving even faster and I remember thinking, Damn! I wonder if my shoes are gonna get wet? The trickle quickly turned into a stream and you had to straddle it as you walked because the wet concrete was insanely slick. If you put your foot down, you were gonna slip out. 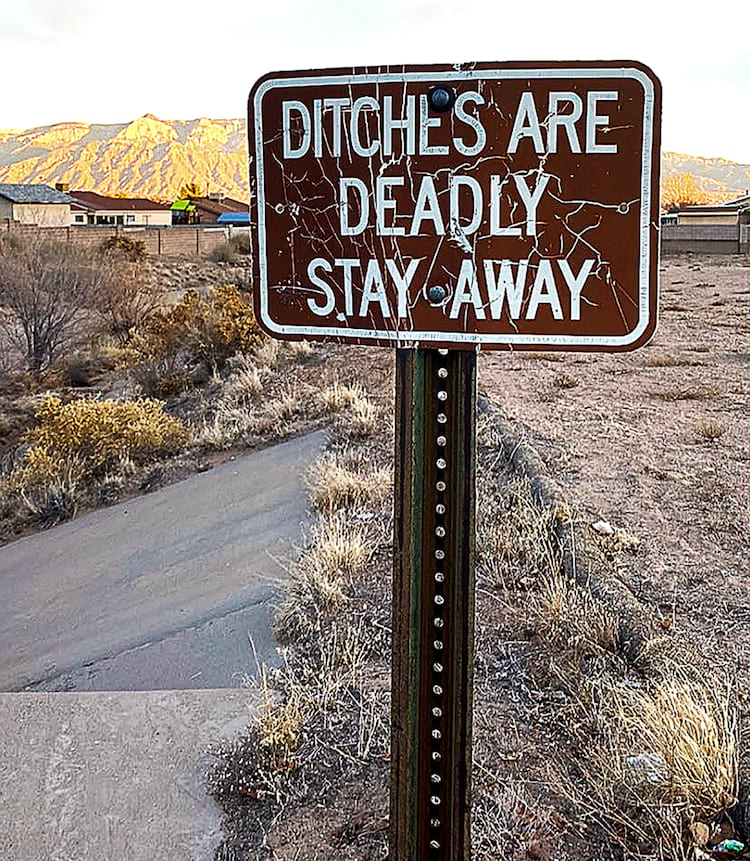 “Hey, I’m stuck!” Kevin called out. He was in the back, his arms were loaded with gear. He couldn’t walk anymore. If he made another move he was gonna slip and fall. We couldn’t move either. I yelled for Wild Man to go get him. But before we could do anything a knee-high wave came crashing around the corner and knocked us all on our asses. At this point you could see the light from the tunnel’s entrance faintly from around the first corner. As we scrambled to our feet I looked towards the light only to see a second wave rounding the bend. It was bigger than the first and came at us like a scene out of a movie! We got washed out again and George, who was in the lead, dropped the generator, which bounced down the middle of the pipe like a boulder. “Center!” I yelled, trying to warn the crew. 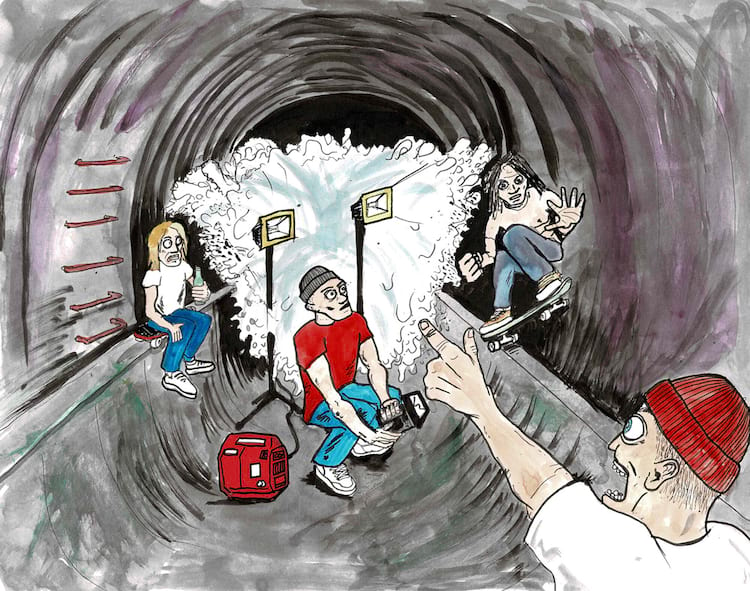 Somehow I was able to grab it with one hand and we all started waddling forward again, soaking wet and definitely scared. Ten seconds later the biggest wave of all showed up. This wave not only knocked us off our feet, but swept us away. The water was too high to even stand up if we could. We were on a fucked-up waterslide from hell! I spun myself around, facing downhill, so I could look for the ladders that occur every so often on the walls of the pipe, thinking maybe I could grab one. But by the time the first ladder came up, which was like five or six seconds later, I was easily going 30 miles per hour, maybe faster, and it would’ve ripped my arm off or dislocated my shoulder or something. 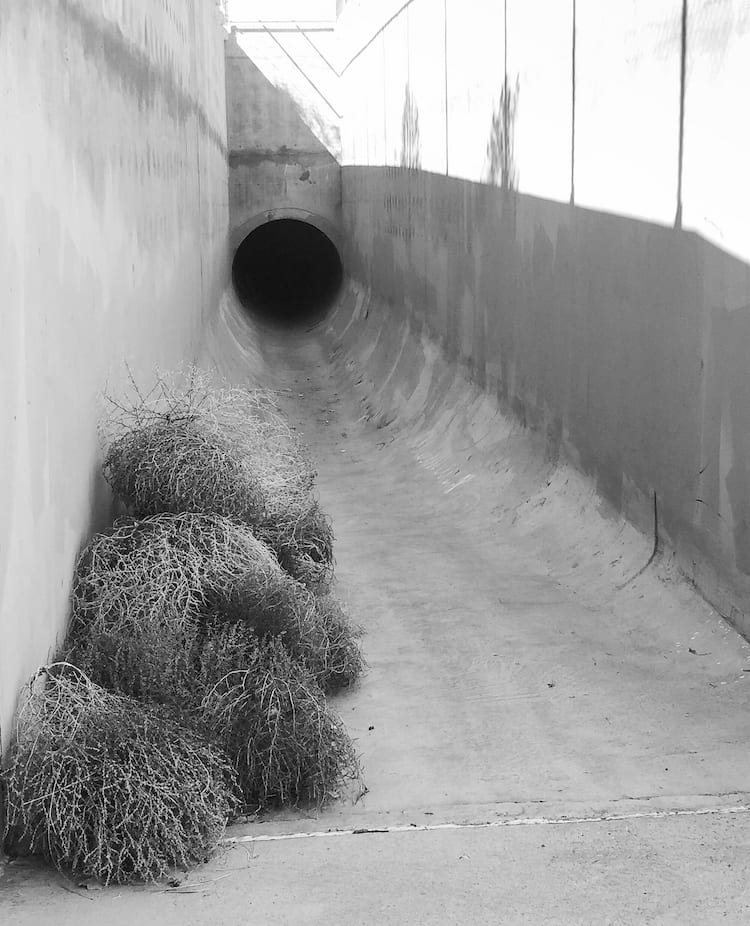 I was kind of buddied up with Wild Man as we skidded along. Kevin was way head of us, since he was in the rear at first, and I didn’t even know about George. He must’ve been behind us at this point. We got bumped around and thrown around and spun around and beat to shit in the dark for two miles. It was fast, man! The water would rush over the back of your head and it eventually took my headlamp off. I watched it float off, going faster than me, then disappear into the tunnel. Behind me, Wild Man still had his flashlight somehow, but it wasn’t much help as he got bucked and tossed. I couldn’t see anything. I started yelling, “Flashlight! Flashlight!” and he’d try to hold it steady so I could see what we might run into. I was still holding the generator and trying to slide on one foot and hold the other one out like shooting the duck in roller skating. Luckily, I had skated down at this end before and sort of knew what to expect. I remembered that at this end of the pipe the sections started not matching up very smoothly, which made big, curb-like seams at the bottom. And, man, I hit the first one and it tossed the generator—this huge Honda generator—into the air and it exploded! This 100-pound thing was just flipping in front of my face! I had to move my legs so it didn’t squash them and then I ended up kicking it way ahead of me because it was just bouncing around, about to break my ankle. Three more minutes of getting scraped, beat to shit and somehow avoiding a head injury and we finally started to see light. Next thing you know we’re spat out the end, blasted free as if by a firehose into a shallow reservoir. We all stood up and looked at each other with bewildered faces. What the fuck just happened? 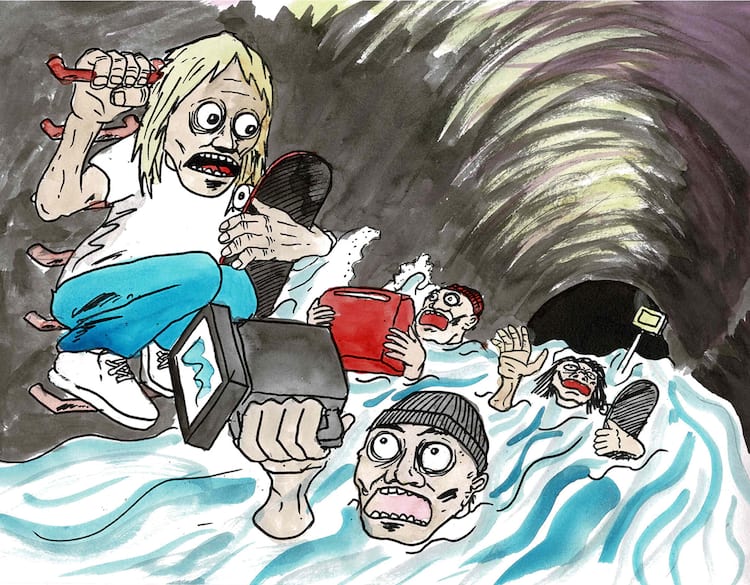 We’d somehow made it out with only scrapes and bruises! As we collected ourselves it suddenly dawned on us that we were missing George. No George! It was still raining and the water coming out of the pipe was almost to the top. There was no going back in there to look for him. Wild Man still had his skateboard, so I told him, “You gotta skate back to the top! Flag down every car you see! Tell ’em to call 911!” We stared at the end of the pipe. Where was George? Immediately I’m thinking he got knocked unconscious or snagged on a ladder and drowned. He’s drowned! He’s in there floating and just drowned. I was mentally going through the motions of the conversations I was about to have. Oh my God, I’m gonna have to see his brother who we skate with, too, and I’m gonna have to talk to his family. This is all my fault. My stupid idea. We stood in the waist-deep water and stared at the pipe. And then five agonizing minutes later, George’s board pops out. His board, but nothing else. Our hearts sank.

“Hey, hey!” We hear Wild Man yell. Oh thank God, he found George! I thought to myself. “He’s not up there!” Wild Man called down to us, “I can’t find him!” I start running towards the road and manage to flag down a car to call 911. In a few minutes we had lots of police and lots of firemen at both ends of the pipe. They said that they couldn’t do anything because the water was raging too hard. It wasn’t safe for an emergency rescue, so we all just sat there for 30 minutes, left to our terrible thoughts and watched the water. And then they got a call that they found George and they were bringing him down to us. George was alive! “I’m okay! I’m okay!” he told us over and over again. We grabbed him in relief, jumping up and down. “I’m okay,” he kept saying. Turns out that when we got knocked on our asses with that first wave, George somehow got pushed to his knees, doing a painful rock-star knee slide along the bottom before managing to grab a ladder. He climbed to the top but was unable to get the manhole cover open. Black widows and spiderwebs covered the top of the ladder. Well, if the spiders are still here, maybe the water never gets this high, George said to himself. He clung to the ladder for the next 30 or so minutes watching as the graffiti on the pipe wall slowly came into view as the water receded, until he finally let himself down and walked out to the entrance and to the waiting police officers.

I STILL HAVE NIGHTMARES and day terrors about drowning or killing my friends while I’m out filming a stupid skateboard video. But everybody’s okay; we all just got beat up. I had to replace all my gear. I spent about ten grand so that I could make my new video. I actually took a break for awhile ’cause I didn’t know if I wanted to do it anymore. I didn’t know if I could be responsible if someone got hurt or even died on one of my projects. I didn’t know if I could be okay with that. I haven’t filmed in a full pipe since then. I’m just trying to think more about safety, having backup plans and trying to think about people first and cool clips second.
My new video is called Black 2.0. It’s named after an ink that is so dark you almost can’t see it. If you take a photo of it, it just looks like a black void. That was the darkest time in my life—almost killing my friends and then thinking about giving up my number-one passion. For awhile that memory was really defining me and I did not see a future filming skateboarding. That spawned into something like a death ceremony, I guess, or a funeral for my old camera gear. I ended up doing a march into that same tunnel and setting my gear on fire. I had to let it all go. I had to put that behind me and face the future. I never really planned it, but it just made sense.