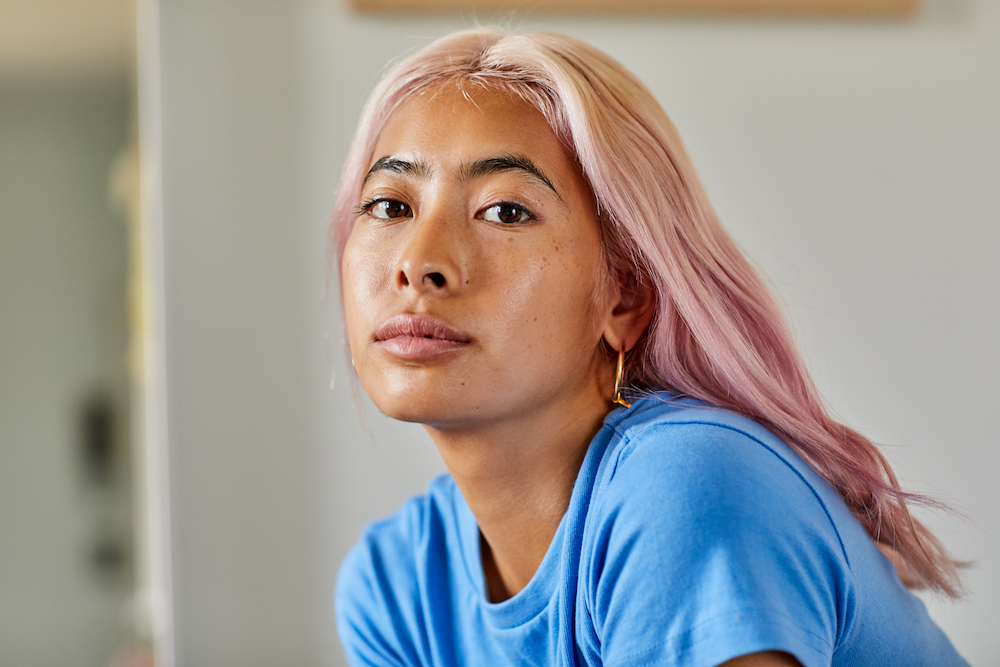 “I recently realized that I’m a grown-up. What the hell? I’ve always thought of myself as a kid. Grown-ups are always so serious, and they’re scared to make mistakes, whereas I think I still am more fearless. I grew up in Indiana, after my parents emigrated from China for graduate school. I loved it—biking to people’s houses, playing tennis with my brother, going to the ice cream stand in the summer… In high school I realized that I really liked fashion. I read a lot of Nylon, and rewatched Confessions of a Teenage Drama Queen and 13 Going on 30 so many times.

CAREER
I was lucky enough to move to New York after high school, and while I was at Parsons I did about seven or eight internships in all aspects of the industry. I did marketing and wholesale at Valentino, worked at Karla Otto as a PR intern, and my first magazine internship was at Nylon. I wanted to do styling, but I also wanted to write, and when I got a job at Refinery 29 I really started stepping into that hybrid role. While I was at Refinery, Lindsay Peoples reached out to me, and I remember the subject line was ‘TV Editor.’ I was like, ‘What is that? I don’t think I’d be a television editor.’ [Laughs] So I put it off for a while, and when I finally clicked into it I saw that it was about a fashion editor job at Teen Vogue. I had been working with small budgets and I wanted to see how creative I could get at a bigger corporation with more resources and support. So I said yes. As soon as I got there, we just started banging out shoots. I had so much creative freedom to define the style and visual identity for the brand, which I would say is colorful, fun, whimsical, thoughtful, and really smart. I started a franchise that was about styling groups of girls within big fashion trends of the season; we did one with rollerskaters, and we did ice skaters of Harlem for a winter story. We were also shooting a lot of celebrities, and learning how to analyze a celebrity’s style and what makes them comfortable, then helping them push it a little bit more. And I really loved supporting young designers in New York.

I left Teen Vogue in May. Now I’m doing a lot of freelance styling and some consulting. And I’m also working with this luxury secondhand marketplace similar to The Real Real called Tradesy. Ever since working at Tradesy, any time I shop, I’m going to go secondhand first. That’s the priority. Sure, you can still be susceptible to trends when you shop secondhand, but at the end of the day, you’re really asking yourself, ‘Is this something I’m going to wear?’ To me, personal style has been trumping trends for a long time. Anyway, I’m making sure that all Tradesy’s best stuff is curated, and I’m working on content creation. Something I wish I had known is that I think you can always go back. I’m glad that I freelance, but I can always go full-time again, and maybe have a better role. No decision is ever as permanent as you think it is.

Grown-ups are always so serious, and they’re scared to make mistakes, whereas I think I still am more fearless.

MAKEUP
Now that I’ve kind of gotten the hang of beauty, I feel like I can experiment more and really elevate an outfit. It’s like an accessory. But sometimes I think, ‘Oh man, this look is complicated and crazy enough that I should keep the makeup simple.’ So either I’m doing a full look, or I’m not wearing makeup. I use Glossier Futuredew as foundation, basically—it evens out my face and makes it glowy enough. Then I use this reddish Milk Makeup Quirk stick for my cheeks, and Saie’s Dew Balm as highlighter. Cream highlighter is so much easier to blend in than powder.

The Relevee Lash Curler from Surratt is flatter, so it gets all of my eyelashes at one time, whereas I would have to move around something that was more curved. It’s better for Asian eyes. Then I either use the Saie mascara or the Byredo one. I love the packaging, and the mascara is really good. I care a lot about the brush—I don’t want the bristles to be too long—and it needs to be able to hold the curl in my lashes without being waterproof because waterproof mascaras are so hard to take off. I also use a Byredo lipstick called Earth Dust. The lady at the Byredo store said that my lips already have a pink tint, so that one would be a good nude for me. I really like it. And I also have a tooth gem. [Laughs] I always wanted one, and when one of my friends did it I thought it was really cute. Mine is a little heart. 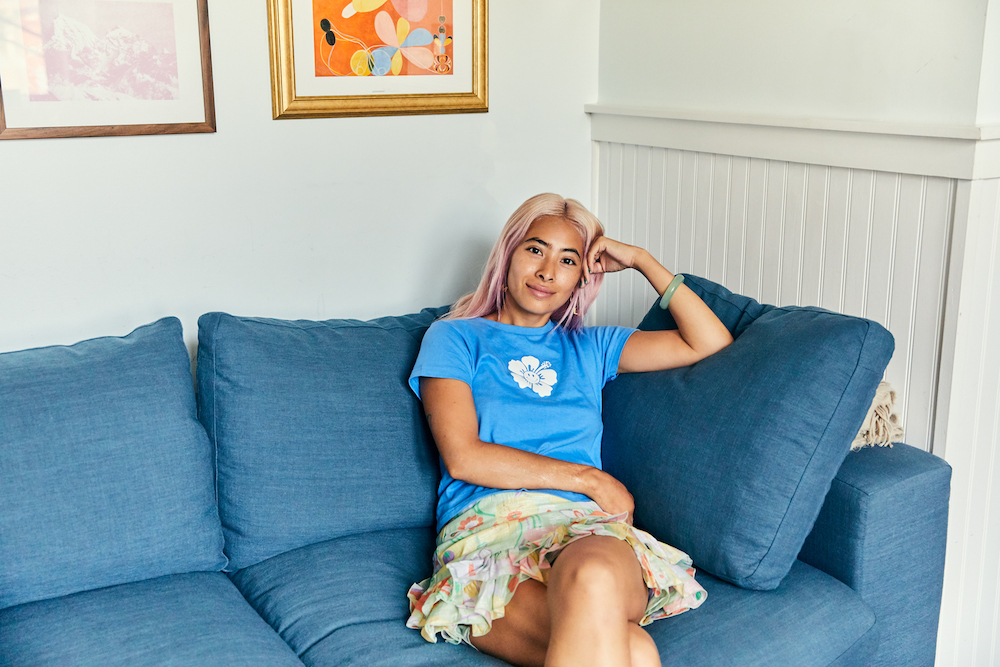 HAIR
I started coloring my hair about four years ago. I went to Colleen Flaherty at Spoke + Weal in Soho, and the plan was always to go pink. I thought I’d try different colors afterwards, but I like the pink so much I can’t imagine doing anything else. It has become such a neutral for me. I can style my hair with anything—any color works with pink. I think I’ll stay pink for a long time.

I’m so loyal to Colleen because at this point, we’ve been doing it for so long. She knows that I like a dusty pink that’s not too purple. We don’t talk about it, we just do it. My first appointment took like seven hours, because I had to go platinum before I went pink. But now I get my roots done and the pink touched up once a month. If I don’t see Colleen for a while, then I’ll use an Uberliss Bond Sustainer in Pink Rose to re-up on the pink. I wash my hair twice a week with purple R+Co Sunset Blvd Shampoo, which keeps the pink from getting yellow. Then I actually don’t use conditioner, because I use K18. That has been such a game changer for my hair. I thought that bleaching it for so many years would leave it brittle, but it’s totally fine. It honestly feels so soft and shiny. I’ve tried a good amount of hair masks—my favorite is the Amika one because it smells so good, and I do use their Supernova Hair Moisturize and Shine Cream every time after I shower. But if I want to actually repair my hair and make it feel better, it’s the K18.

It has become such a neutral for me. I can style my hair with anything—any color works with pink.

SKINCARE
I had really bad psoriasis and dry patches all over my face, and honey cleared it up. Dermatologists always gave me some kind of cortisone, but it wasn’t very good and I’d kind of accepted that I’d always have very dry skin. Over winter break in college I went to work on a Manuka honey farm for fun because I’d always wanted to go to New Zealand. It was so much fun, but I got really sunburnt. The mom of the family that owns the farm told me to try the honey we were harvesting on my face. Every night, we’d sit in front of the TV with Manuka honey dripping off our faces. Now I only wash my face at night, and I use Drunk Elephant Beste No. 9 Jelly Cleanser, which is really gentle and still gets the job done. My favorite product of all time is this Worker B Honey Face Wash, which I actually use as a mask after I cleanse. I got the recommendation from my friend, Mi-Anne Chan, who I met when she was a beauty editor at Refinery29. It’s completely changed my life—I think honey has magical properties. 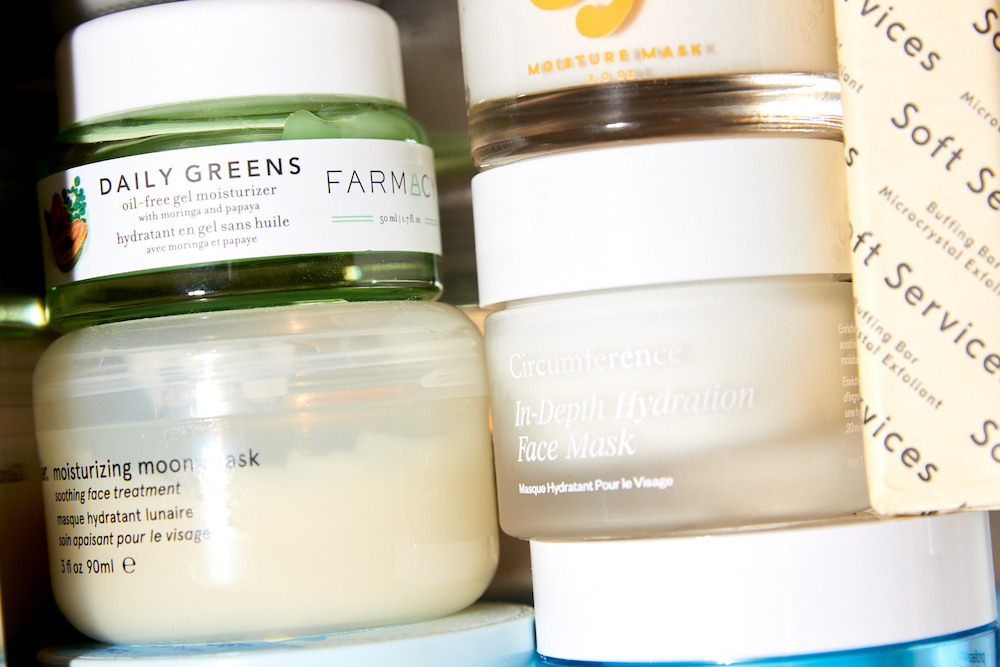 Sometimes I’ll use this Dieux Deliverance Trinity Serum. I don’t love having a lot of product on my skin, so I don’t use many serums, but this one absorbs really well. And I think it helps a lot with inflammation—especially when I’m starting to get my period. It’s good for hormonal acne. Then, I use this Drunk Elephant Virgin Marula Oil. I started using face oils maybe two or three years ago—the first one I really liked was the Circumference Pure Balancing Botanical Face Oil, which was also from Mi-Anne. I gua sha, and massaging in a good oil feels really nice. When I do that, I don’t have to do as much work in the morning. I just wake up and my face feels moisturized. In the morning I’ll just wet my face and use this Tata Harper Water-Lock Moisturizer. I’m really obsessed with it. I found it when I was in California, because it’s so dry there and I really needed a good moisturizer. I’ve been using it a lot since. Then I’ll use this ZitSticka Megashade Sunscreen Serum. It’s creamy, which makes me feel like it sinks in more quickly, and it’s very lightweight, so I’m not totally aware that I’m wearing sunscreen.

I get two totally different types of facials: Face Gym, and dermalinfusions at Glo Spa. I love Face Gym. I love having people touch my face—it feels so chill and relaxing. That being said, I don’t think I go frequently enough to actually see any results. The dermalinfusion though, my skin is glowing afterwards. I honestly don’t really know what it is. All I know is that they use a tube to suck out all of the clogs and pollution, and then infuse [my skin] with other things.

BODY, FRAGRANCE + NAILS
Even though I don’t have to deal with eczema and psoriasis anymore, I still like to use a gentle body wash. I love Nécessaire’s fragrance-free one. I use the Kate McLeod Daily Stone as a moisturizer, or I’ll use the Costa Brazil Kaya Jungle Firming Oil. I got it as part of a gift box, and it’s so nice. I don’t know if it’s firming though. 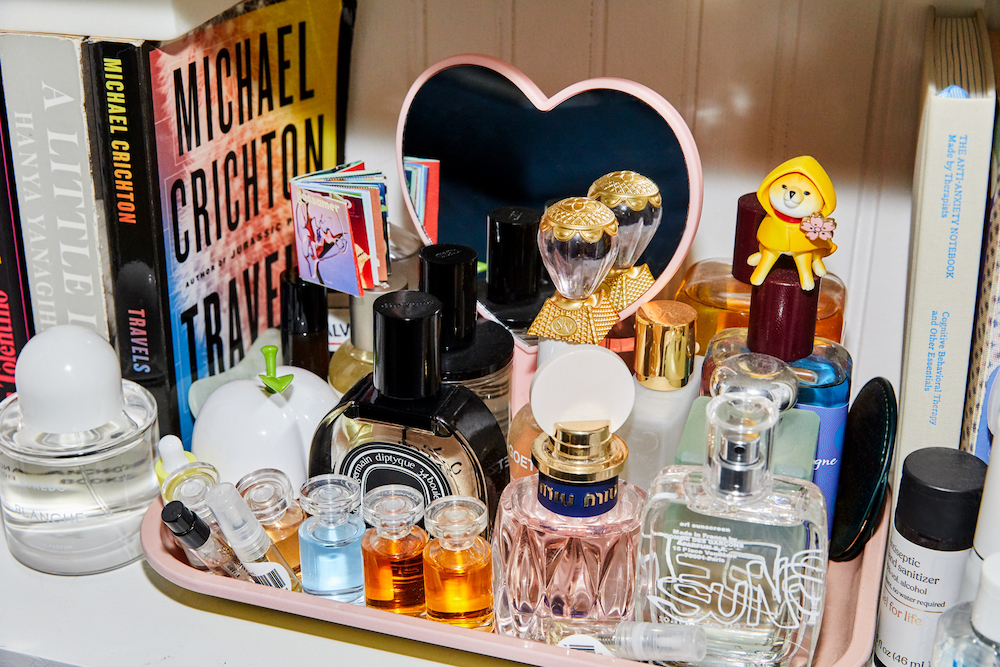 I’ve started getting really into fragrance. I either love when they’re really smoky and have a hinoki wood scent, or I like it to be very clean with small floral scents. D.S. & Durga Rose Atlantic has a really nice, clean, sweet smell, and I think it mixes with my body really well. Especially when I’m sweating a lot, I like the way it makes me smell. That applies also to this ERL Sunscreen Eau de Toilette made by Comme des Garçons. It does kind of smell like sunscreen, but in a clean way. The smoky ones I love are Le Labo’s Thé Noir 29, and Byredo’s Mixed Emotions.

I never get my nails done, so this manicure is very exciting for me. I got it done at Paintbox, with Holiday The Label. I usually wear my nails short, with no polish. It’s laziness, but I also don’t want to spend the money. If I had to spend money on one thing, it would be clothing.”

—as told to ITG