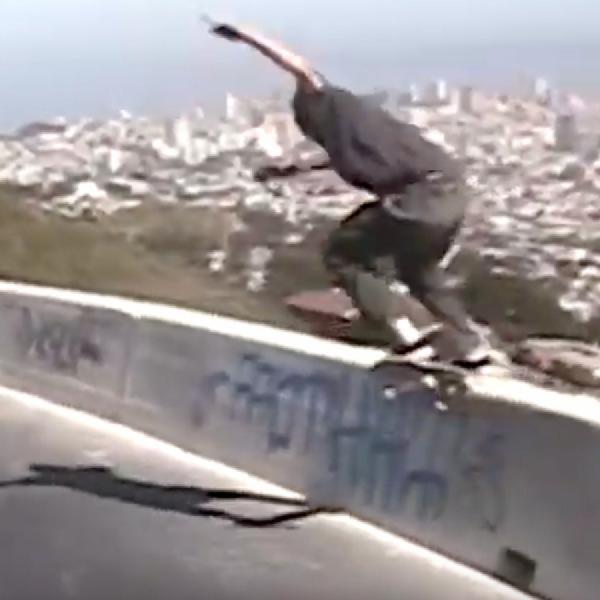 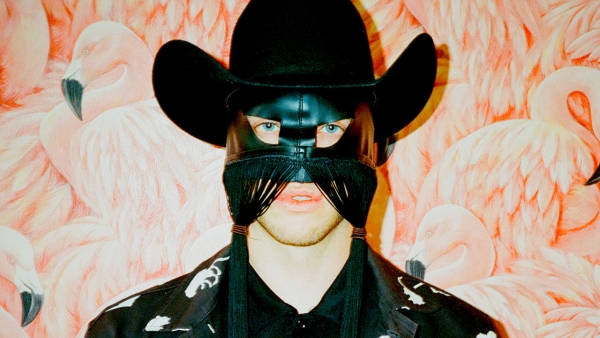 ORVILLE PECK was introduced to the world in 2019 with his debut album Pony on Sub Pop records. The tunes caught the ears of country fans, punks, pop enthusiasts and everyone in between. Writing from the heart and keeping showmanship a priority proved to be a successful combination when he sold out every show on his recent tour. He wears his signature rhinestone fringe mask to magnify his nomadic, lonely lifestyle. At first glance you may have more questions than answers but if you’re stuck wondering, Who is Orville Peck? the answer is, Orville Peck is a country star who skates. —Jordan Joseffer

Thanks for taking the time to talk.
Of course. Thrasher is my favorite childhood magazine so I’m pretty stoked.

I saw you posted a photo of you skating on your last tour. What’s your background with skateboarding?
I don’t get to skate that much these days, unfortunately, but I try to get it in a little bit. I’m pretty rusty. I’m just in a street kind of vibe. You know, like ollie up a curb and that kind of shit.

Most people I talk to credit skateboarding for finding the music they love. Is that the case with you?
Definitely. I learned about the Misfits from skate videos; I learned about The Cure; I learned about most stuff. That’s why to this day when people hit me up like, “Hey, we’re a small skate crew and we’re doing this video and we want to use one of your songs.” I always tell them, “Yeah, for free.” I never charge anyone nothing because that’s how I got into a lot of music.

But not much country music has been used in skate videos. Do you remember your first experience with country music? What drew you to it?
I think it was when I was little and I discovered Dolly Parton. I thought she was like Pee-wee Herman or Elvira or something. I thought she was a character because she was just larger than life. I got further into country and I realized that there’s this incredible combination of character, storytelling and bold costumes but combined with sincerity—really personal stories and I just think that’s the perfect combination to make art.

Would you say that your aesthetic helps tell your story?
Yeah, obviously I have a pretty heavy aesthetic. I wear what can be construed as a costume, but to me being a country star means taking who you are at your core and magnifying that to the maximum. So for me, I grew up a weird kid—skater, punk, lonely, I listened to all kinds of freaky music and I traveled around a lot. So my core are those feelings that I still live with now, with intrinsic loneliness and a nomadic lifestyle. So the maximum portrayal of that in a sincere way is the epitome of what a lone cowboy is, so that’s why I do what I do visually. It’s who I am at my core. 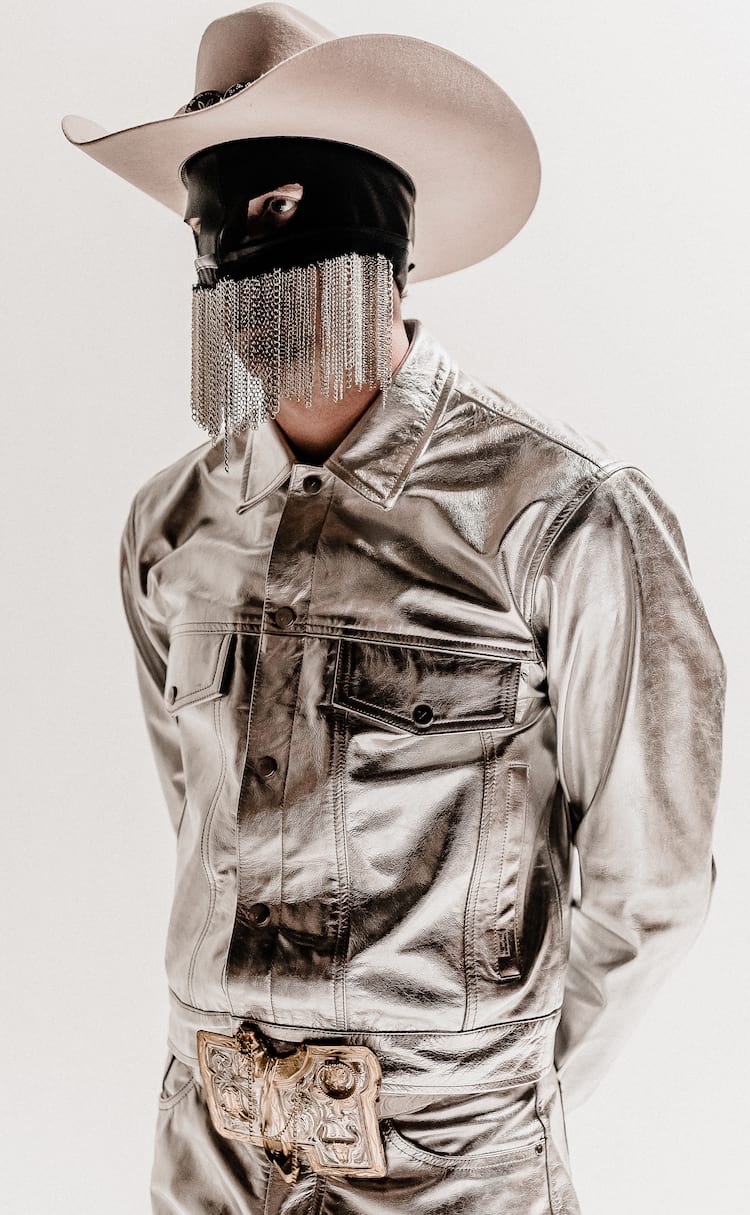 You just got off a pretty long sold-out tour. That’s quite the accomplishment for your first album.
We just did 120 shows basically in a row. We were on tour for five months consecutively. It was gnarly at times. Obviously it’s rigorous, just physically, emotionally and mentally. I love it. As I said, I traveled around my whole life and so to me being on the road is being busy. That’s what keeps me from feeling down. I like to stay busy and I like to keep traveling so it was amazing. Things have just been on a really great trajectory the past five or six months.

Are there cowboys in Europe?
Hell yeah there were some cowboys in Europe. It was great. I love playing in Europe. There’s even parts of the States that we play in where the idea of cowboy culture is so romanticized for them, but they don’t have a connection to it. Then you go overseas and it’s even more so. People get into dressing up. I love that. I love anybody who wants to fulfill their yee-haw fantasy. I’ll always support that.

What are your pre-show rituals?
I did a lot of performing in different ways growing up, so my go to is to go into a performer mode and just go on autopilot and kind of put on a generic performance. So before every show I really, really try to focus on knowing that each show can be different and it’s way better to focus on connecting with people in the audience and making connections to what I’m singing about and what it means to me. So I really try to take a minute before I go on and think about what the songs mean to me and what they may mean to other people and how to convey that.

Does it trip you out to see people getting Orville Peck tattoos?
Kind of, but it trips me out in a good way. The first few were really kind of fucked up for me because it’s incredible. It’s a very strange thing that people want to invest in what I do in that way and it’s amazing. Now I see a new one pretty much every day, which is also insane, but I’m kind of used to it now. On one hand it’s kind of intense, on the other hand I would never hate on it because I get it—I’m a fan of music and I’m a fan of artists. I’ve got tattoos of people who I really respect or feel inspired by so the fact that people do that to me is really wonderful.

You’ve been getting a lot of praise from the style/fashion community. Is that just as flattering as getting a good music review?
Yeah, for sure. It’s funny because I don’t hold much weight in the fashion world. It’s something that can sometimes be superficial but I’ve been really lucky. I’m a fan of style and I’m a fan of fashion moments. I wouldn’t say I’m a fan of the fashion industry but I’m a big fan of fashion. Getting to work with Dior, getting to do shoots for GQ and wear incredible outfits, I mean, it’s totally flattering. I went to my first ever fashion show a couple of weeks ago in Miami and I was sitting front row in custom Dior next to the fucking Kardashians and Travis Scott. It’s a trip, for sure. It’s a world that’s ultra bizarre but it’s also a world where there are a few people who are still really making cool shit and ethically doing it the right way. It’s a really beautiful art form.

Does it feel like everything is coming at you 100 miles per hour? Could you see yourself sitting next to the Kardashians a year ago?
Definitely not. It feels like a pretty insane roller coaster. I definitely pinch myself a lot these days. It seems like every time I open my email there’s another completely crazy situation. It’s funny. I think I’ve gotten to an age now where I’ve really learned how to enjoy it and appreciate it and it sounds really cliché but to just be grateful for it. I set out to make music that is genuinely important to me and the fact that people are responsive to it is—there’s no feeling like that. It’s the most you could ever ask for.

How would you hold up in a rodeo? Do you have lasso and bull riding skills?
My lasso skills aren’t too hot but I’ve definitely ridden a lot of mechanical bulls. I don’t know about a real bull. I would probably be too scared because I like animals too much. I’d probably be too gentle.

I’m no expert but there is a stigma of closed mindedness associated with country music fans. Have you had negative experiences from the country music scene for being openly gay?
It’s been very interesting. I can happily say that for the most part true country fans, like people who swear by country and also other country musicians, like the people who play at the CMAs, all of those people really love what I do because I think they understand my references and they understand my place within country music. They acknowledge art and they respect it so that’s been lovely. As a fan of country and as someone who makes country, I wasn’t sure how that was going to go down. So I can happily say that for the most part it’s been really positive. Of course I get the odd kind of harassing or crazy comments, but I think that’s kind of par for the course these days if you’re doing anything that can be construed as unique.

Do you have a New Year’s resolution?
Yeah, I’m really trying to quit smoking—for the millionth time. And I’d like to skate more, too, because I really do miss skating. Next year I’m definitely bringing a board on tour and I’ll try to hit some parking lots or something.

Putting a video together is never easy, but a supportive squad always helps. Dakota, Jon, Tim and Miner feed off each other to finish another epic Emerican edit. As Dickson says, “It was exhilarating, to say the the least.” 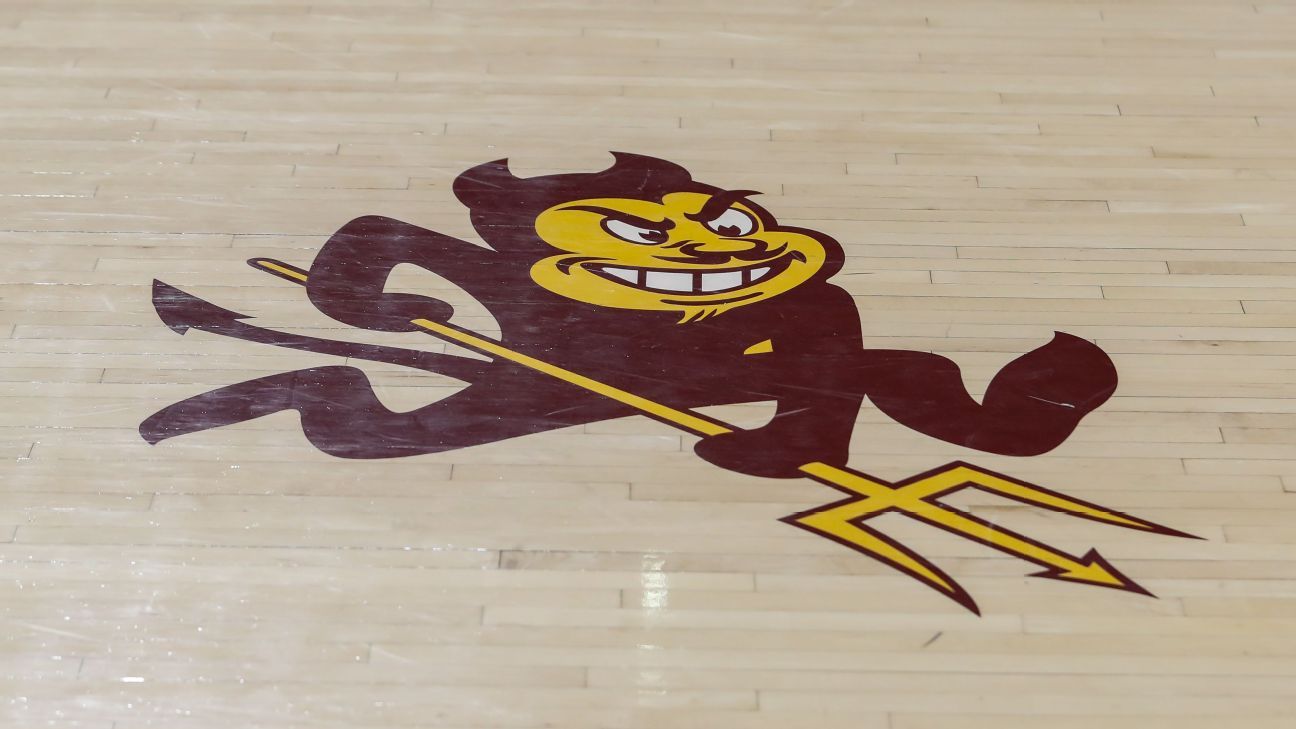 Arizona State has acknowledged its slow response to sexual harassment allegations against an athletic booster who was eventually barred by the school in December, telling Yahoo Sports that the case “could have been resolved in a quicker time frame.”

In its statement to Yahoo, Arizona State said it had canceled Wear’s season tickets and told him he is not welcome at school events after determining he made “unwelcome comments and physical contact” to the three women.

“Related to the donor issue, the university acknowledges that the matter could have been resolved in a quicker time frame and has taken steps to remind those involved that we have investigative resources to deal with these types of issues as soon as they arise,” the school said in its statement.

The accusations came to light from a notice of claim filed by Cohen this week in which he seeks $1.5 million to settle what he deems a wrongful termination after he pushed athletic director Ray Anderson and other school officials to investigate Wear. Cohen was removed from his job in August and was formally fired in December. The notice, a copy of which was obtained by Yahoo, could be a precursor to a lawsuit being filed.

The claim said Anderson continued to associate with Wear after being informed of the allegations and that Wear joined donors in traveling to Michigan State for a September football game.

Anderson declined to speak with Yahoo and referred a reporter to Arizona State media relations officials. Arizona State said in its statement that Cohen originally downplayed the severity of what happened to his wife.

“Even though this has been a very challenging and difficult time for my family, I am confident I did the right thing,” Cohen said in a statement. “I spoke out because I have a moral responsibility to protect three women that the University failed to protect. These women are the victims, and they deserve to be heard.”

Arizona State said in its statement to Yahoo that an investigation found no retaliation was made against Cohen by the school.

Wear did not respond to requests for comment from Yahoo.